Former Indian cricketers Harbhajan Singh and Yuvraj Singh have declared that they have nothing to do with Afridi after former national team captain Shahid Afridi called the Indian Prime Minister a coward.

Speaking on an Indian TV program, Harbhajan Singh said, "I am offended by Shahid Afridi's statement in which he slandered our country and our Prime Minister and this is unacceptable."

Former Indian cricketers Yuvraj Singh and Harbhajan Singh donated to the Shahid Afridi Foundation at the request of Shahid Afridi after the outbreak of the coronavirus.

"The truth is that Afridi appealed to us for donations and we did so for a good cause for humanity and for those affected by the coronavirus," Harbhajan said.

Harbhajan said that our Prime Minister Narendra Modi also said that the fight against the coronavirus transcends any border, religion, or caste, so we had no doubt that the goal we are promoting is in crisis. He had to help the people around him.

He said that he was saying wrong things about my country, I just wanted to say that I have nothing to do with Shahid Afridi,
They have no right to speak against our country and they must live in their own country and in their own time.

"If today or tomorrow my country needs me anywhere, even on the border, I will be the first person to carry a gun for the sake of my country."

"I helped the Shahid Afridi Foundation on a humanitarian basis, but now my relationship with him is over," he said.

"Someone asked me to appeal for humanity and I tried my best but that's enough, from today I have nothing to do with Shahid Afridi," Harbhajan said.

On the other hand, following in the footsteps of Harbhajan, Yuvraj Singh also announced to sever ties with the former national team captain. 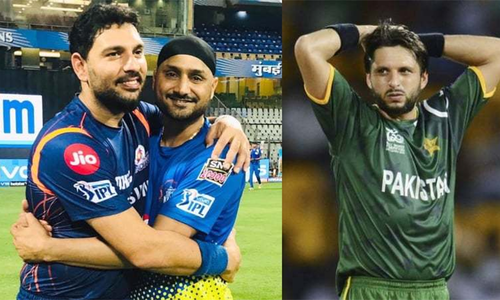 "I am very disappointed with Shahid Afridi's words about our Prime Minister," Yuvraj said in a statement on the social networking site.
As a responsible Indian representing my country, I cannot tolerate such words. I appealed for the sake of humanity but I will not do it again.

It should be noted that Shahid Afridi is visiting different parts of the country these days to work for his welfare organization Shahid Afridi Foundation and to help the poor and in this regard, he also visited Azad Kashmir.

Boom Boom Afridi had said that India has to account for all its atrocities in this world and in the hereafter and the self-proclaimed brave Indian Prime Minister Modi is a coward who has amassed more than 700,000 troops in small Kashmir.

Corona virus goes out of control in India

Related Posts
Education Minister Shafqat Mahmood's Daughter's Discussion on Social Media
Corona to Amitabh: Shoaib Akhtar Won the Hearts of Indian Fans
After a Week of Searching, the Body of Actress Naya Rivera Was Found
Rain in Karachi is Directly Proportional to Incompetence; Showbiz Personalities
I never wanted to be an actor
Unique expression of love of fans, statue of “Ertugrul Ghazi” installed in Lahore
When will Ahsan Khan's drama 'Bandhe Ek door Sy' will come?
No Matter What Clothes Women Wear, Men Will Account for Their Looks, Hamza Ali Abbasi