Singer and rapper Badshah is well-liked in India and other countries of the region, including Pakistan and the Middle East, for his disco songs.

Other songs, including his song 'Paagal', have also made it to the most viewed songs on YouTube, and his songs are also heard at weddings and parties.

Recently, Badshah answered fans' questions on Instagram, where he also asked a question about his fan, Pakistani actress Hania Aamir.

Badshah shared the video of the question asked to Hania Aamir on Instagram and answered in the video. His short video went viral on social media, and the actress answered him.

In a short video shared by Badshah, he read a question from a fan, in which the fan asked him how he likes Hania Aamir and does he follow her on Instagram.

Badshah gave a short and clear answer to a fan's question and admitted that he follows Hania Aamir. 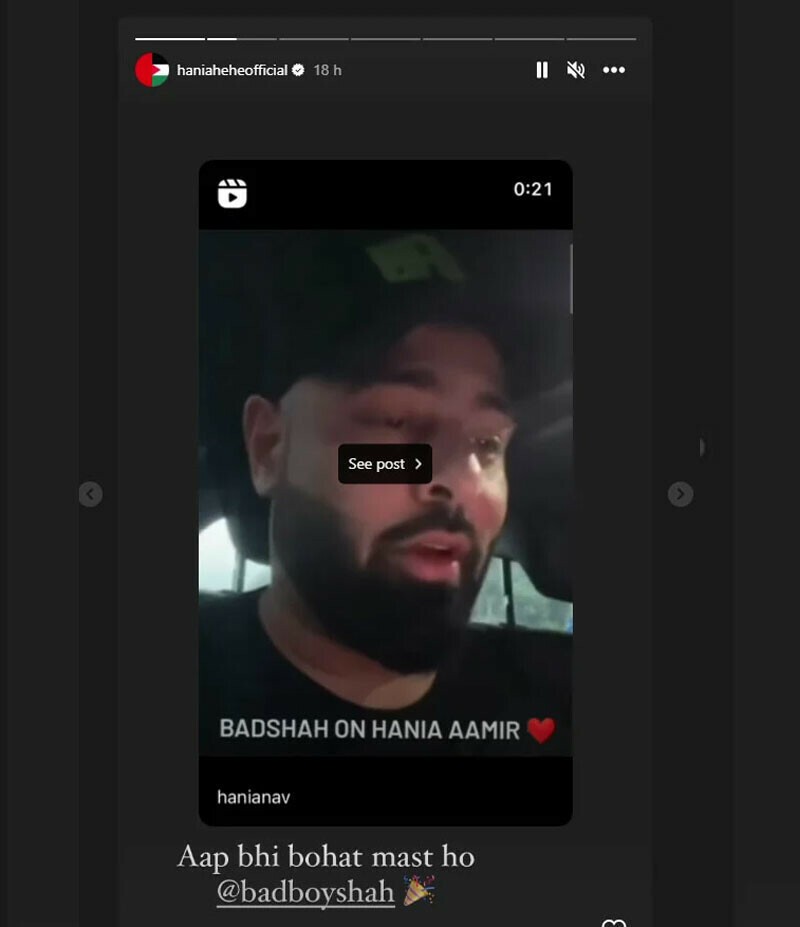 The singer said, "He finds Hania Amir Mastbandi," looking at him to improve his mood.

Badshah further praised the Pakistani actress, saying that Hania has a very nice and clean personality and that he thinks she is also a great person.

The said video of Badshah went viral on social media. People also commented on his video and wrote why Badshah's mood would not be good after seeing Hania Aamir?

After the Indian singer's video went viral, Hania Aamir also shared the screenshot of his video in an Instagram story, mentioned him briefly, and wrote that 'Badshah is also very drunk'.

Like the Indian singer, the screenshot of the Pakistani actress' answer also went viral on social media, and people commented on it.

I m a content writer and lifelong learner with an ongoing curiosity to learn new things. I use that curiosity and my experience as a content writer to write about subjects valuable blogs. My primary interest is developing easily available materials to teach people about content writing. When I have free time, I like two activities above all others: writing and travelling.

I have been a victim of domestic violence and sexual abuse, JK Rowling

My life changed after performing with Abida Parveen

Urwa and Farhan Careful Look During the Promotion of 'Tich Button.'