Hadiqa Kiani, a well-known Pakistani singer and actress, has taken a break from social media to care for her mother. Her team made the revelation in a storey uploaded on Hadiqa Kayani's Instagram account.

Hadiqa Kayani has opted to take a hiatus from social media due to the health of prominent poet Khawar Kayani, according to her Instagram storey. According to the narrative, she was temporarily avoiding social media in order to focus on her mother's health. The statement also expressed gratitude to her supporters for their prayers for her mother's recovery. 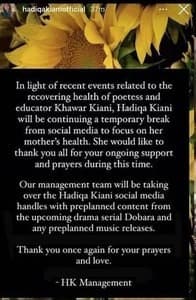 Hadiqa Kayani's social media accounts will be managed by her management team during this time, and she will broadcast pre-arranged content relevant to her future music, including the 'Dobara' drama, according to reports. Hadiqa Kayani, as you may recall, posted a tale on Instagram last week and included a comment citing her mother.

His mother, on the other hand, has been afflicted with numerous maladies for some time and has suffered from weakness and weakness, but she was not shown in a wheelchair in some of the photographs. Hadiqa Kayani's mother, Khawar Kayani, is a poet and former principal of a government school. Hadiqa Kayani made her acting debut a few months ago with the drama serial 'Raqib Se,' and her drama was a huge success.

In addition, he is currently filming alongside Bilal Abbas for his new drama 'Dobara,' which will premiere soon. Momina Dareed Productions is producing a drama starring Bilal Abbas Khan and Hadiqa Kayani, which will show on the private channel Hum TV. However, there has been no word on when it will be broadcast.

Xiaomi Fan Festival - Uplifting and Giving Back to The Fans