YouTube had claimed that the video had been removed from Hadiqa Kiani's channel under copyright, while the removal of the video from the Kashmiri Sevitas channel had resulted in a message that the video had been privatized. The song was released by Hadiqa Kiani along with Turkish singers with the help of an organization called 'Kashmir Savitas' to pay homage to the martyrs, including 22 people who were martyred in Kashmir by the Dogra king on July 13, 1931. And those who lost their lives in thwarting a military coup in Turkey on July 15, 2016. 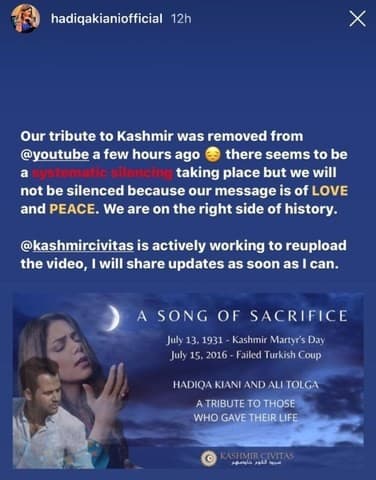 The song was released in Turkish, Urdu and Kashmiri, which became popular as soon as we saw it. After the song was removed from YouTube, Hadiqa Kiani had said that Kashmiri Savitas was in talks with the YouTube administration and would inform the fans as soon as the song was re-released.

The new video includes pictures of the protests of the unarmed people of Occupied Kashmir, but now the atrocities of the Indian Army have been removed from the video.

Pakistani Scientist has Discovered Symptoms of life on Saturn

Baby girl Born in the US Space Named Sky

Related Posts
Maryam Nafees quietly tied the knot
YouTube has removed the video of Saba Qamar's “Wedding in Corona” due to copyrights
Turkey's Top Cultural Award for Amjad Islam Amjad
The Arrival of Ertugrul Ghazi's Character 'Duan Alp' in Pakistan
What Is Pakistani Culture? Has Not Been Answered. Usman Khalid Butt
Neelam Muneer Just Did Her “First and Last” Item Song.
No Matter What Clothes Women Wear, Men Will Account for Their Looks, Hamza Ali Abbasi
Kristen Stewart Ready to Become Princess Diana