There are reports of former actress Noor Bukhari, who left the showbiz after living on her fourth wedding anniversary in September 2017, according to religious teachings that she married for the fifth time.

It is reported that Noor Bukhari has re-married ex-husband Aun Chaudhary for the fifth time, and fans are surprised at the news of the re-marriage of the two.

It may be recalled that Noor Bukhari had approached the Lahore court for Khulla in early 2017 after differences with her fourth husband, singer Wali Hamid.

Noor Bukhari announced through a separation of her fourth husband via social media post that she knew that now people would call him wrong and wrong things would be said against her, but she did not care and now she lives alone.

After taking her fourth husband, Noor Bukhari had announced to live in accordance with religious teachings, greeting the showbiz and later appearing in religious programs on TV. 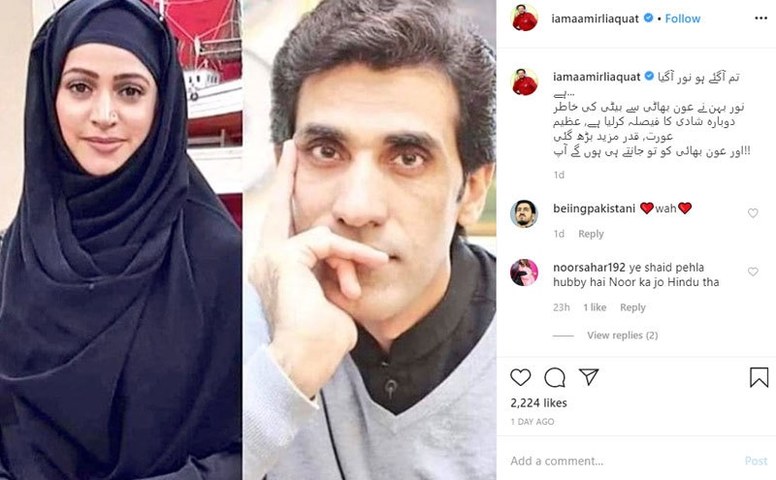 After the failure of her fourth marriage and the beginning of her religious life, Noor Bukhari also opened her own YouTube channel in which she appeared to preach religiously.

However, two-and-a-half years after the end of her fourth marriage, it is reported that she remarried for the fifth time with her ex and third husband.

Noor Bukhari's fifth marriage when he shared a photo of his ex-husband, Aun Chaudhry, on Instagram and declared him 'his real hero'.

Noor Bukhari did not write anything while sharing the photo of Aun Chaudhry, but many people congratulated him and wished him well.

The people and fellow actors who congratulated Noor Bukhari expressed their best wishes for him without mentioning the re-marriage.

However, former TV host and Pakistan Tehreek-e-Insaf (PTI) member Aamir Liaquat Hussain shared a picture of Noorbukhari and Aun Chaudhry on his Instagram, claiming that the actress decided to remarry with her ex-husband.

Amir Liaquat Hussain wrote that 'You have come forward Noor has come, Noor sister has decided to remarry for the daughter of Aun bhai.

Citing the same report, the Express Tribune reported that sources close to the couple confirmed that the two had remarried a year ago.

The report quoted sources as saying the couple had children again and the two now became parents of two children.

After the news of his fifth marriage came to light, Noor Bukhari has yet to make any statement, while no statement has been made by Aun Chaudhry.

It may be recalled that Noor Bukhari and Aun Chaudhry were also married in 2012, but the marriage ended in divorce only a few months later.

Even before marrying Aun Chaudhry, Noor Bukhari had two marriages and both marriages ended on divorce.

Noor Bukhari married the industrialist Vikram in 2008, which lasted less than 2 years and the two divorced in 2010.

After the first divorce, Noor Bukhari married Farooq Mengal 8 months after the second divorce, which lasted barely 4 months and the two divorced.

In 2012, after the first two divorces, Noor Bukhari married Aun Chowdhury, but his marriage ended shortly after the divorce when the actress married her fourth husband in 2015.

It is now reported that the actress married her ex-third husband for the fifth time a year after the fourth divorce.

It was a Sin to Cast Mahira Khan in 'Sadqa Tumhare', Khalil-ur-Rehman Qamar