After a photo of Pakistani actor Fawad Khan was shared by Indian female film producer Shelja Kejriwal, there are rumors that the actors will soon be seen working with Sanam Saeed in a web series.

Shelja Kejriwal shared a photo of Fawad Khan on Instagram on September 26 and wrote in a short caption, "Finally, life is successful." In the picture of Fawad Khan shared by him, the actor can be seen in a slightly different form and it is estimated that the said picture belongs to the character of a play or web series of the actor.

Although Shelja Kejriwal did not write anything further with Fawad Khan's picture, fans and people started commenting and asking him if Sanam Saeed would be a part of the project along with Fawad Khan. Commenting on the Indian producer's picture, Pakistani filmmaker Mehreen Jabbar expressed happiness and wrote that he is excited for it.

After Mehreen Jabbar's comments on the Indian producer's post, people started saying on social media that Fawad Khan will soon appear in a web series, which will be aired on Indian streaming website 'Zee Five'. Shelja Kejriwal has been producing web series and films for 'Zee Five', she has made several Bollywood films including 'Qarib Qarib Sala, Madari, Toba Tek Singh, Hamidabai Ki Kothi, Jeewan Hathi and Lala Begum'. 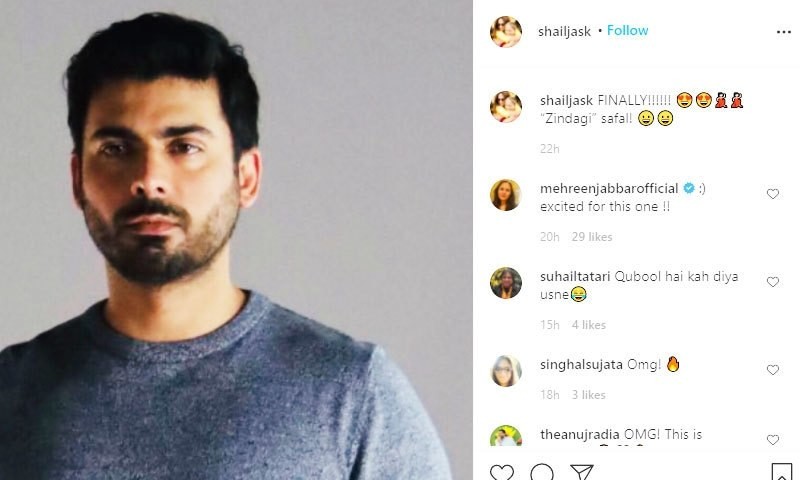 There are rumors that Fawad Khan may be producing a web series, which is being made by Mehreen Jabbar, but no confirmation has come to light so far. Mehreen Jabbar had made a web series called 'A False Love Story' for 'Zee Five' a few months back, which was well received.

Now there are rumors that Mehreen Jabbar may again be busy making a web series for 'Zee Five' based on other actors including Fawad Khan and Sanam Saeed, possibly called 'Zindagi Safal' but nothing to say in this regard. It's too early. It may be recalled that the duo was much appreciated in Fawad Khan and Sanam Saeed's popular past drama 'Zindagi Gulzar Hai' and the said drama was also well received in India.

Fawad Khan has acted in films like A Heart Is Hard and Kapoor & Sons in India and has millions of fans there. It is believed that Mehreen Jabbar or Shelja Kejriwal will soon explain more about the possible web series of Fawad Khan and Sanam Saeed.

Sonu Nigam is Also Fascinated by the Voice of Hadia Hashmi

Humayun Saeed Has Neither Voice Nor Good Character, Firdous Jamal

Check Your Bank Balance Before Asking Me, Waqar Zaka

The Reaction of Showbiz Personalities on Imran Khan's Disqualification