Fans advised the drama team after she was once again given the role of loving her cousin in 'Superstar' actress Mahira Khan's recently aired drama 'Hum Kahan Ke Sachey Thee'.

Although not many episodes of the play have been aired, the story, characters and scenes have won the hearts of the audience. Through 'Where We Were True', Mahira Khan has returned to the small screen after 6 years and she has played the role of 'Mehreen Mansoor' in the play.

The play shows the actress having a romance with her cousin, to which a fan gave useful advice to the drama team and asked them to change her name. A man named Jasir Shahbaz commented on the glimpse of Mahira Khan's play that the actress has been shown falling in love with her cousin for the fourth consecutive play. 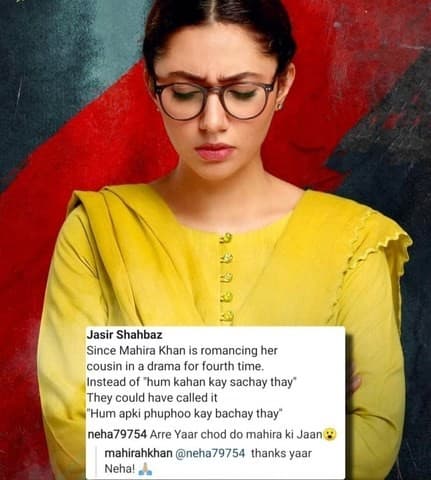 Fans commented that the play should have had a different name when it showed the actress having a romance with her cousin in "Where We Were True". Although the actress and others did not express their displeasure over the said comment and suggestion of the fan, some people also appealed to the person giving the said advice to kill Mahira Khan.

Apart from Mahira Khan, several actors have been seen in dramas having romances and marriages with their cousins.