In honour of the late actor and comedian Omar Sharif, Administrator Karachi Murtaza Wahab has announced that the Shaheed Millat Underpass will be named after him.

Murtaza Wahab claimed in a tweet that the underpasses on the Karachi Metropolitan Corporation (KMC), Shaheed Millat, and Haider Ali Road had been renamed 'Umar Sharif Underpass' in honour of Umar Sharif's contributions. Will be given a name.

Minister for Information Technology and Telecom Malik Amin Aslam, on the other hand, visited Omar Sharif's home, according to the Dawn daily. He said he was in contact with Foreign Minister Shah Mehmood Qureshi to arrange for the return of Omar Sharif's dead body within 48 hours.

He stated that he would write to the government requesting that Omar Sharif be buried with state honours. Omar Sharif, the legendary comedian and actor, died on October 2 at a European hospital in Germany. After becoming ill while being brought to the United States from Karachi, he was taken to a German hospital. 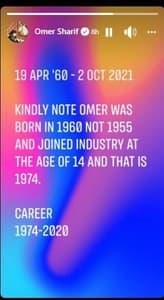 Omar Sharif's son told the media that his father wanted him to be buried in Abdullah Shah Ghazi's mausoleum, so we are requesting that the Sindh government allow burial on the mausoleum grounds. The Sindh government agreed to the famous comedian's burial in the shrine when the family requested it.

Omar Sharif's family, on the other hand, has not stated when he will be laid to rest. In addition, Omar Sharif refuted the date of his birth and the start of his profession in a message from his official account. Omar Sharif was supposed to have died yesterday at the age of 66, however according to a post on his family's Facebook page, "Please note that Omar Sharif was born in 1960 and he joined the profession at the age of 14 in 1974."

In recognition of the services rendered by late #UmerSharif, KMC will name its underpass at the junction of Shaheed e Millat & Hyder Ali Roads as “Umer Sharif Underpass”.

It went on to say that his career lasted from 1974 to 2020. Omar Sharif had been sick for over a month and a half and was being treated at Karachi's Aga Khan Hospital. He had heart problems, kidney illness, and diabetes, to name a few ailments.

The spectacular Photowalk to Khunjerab Pass by TECNO

Related Posts
TikToker arrested for cheating the lead actor of Ertugrul Ghazi
Amber Heard humiliated her husband and was addicted to drugs: former maid
Iqra Aziz and Yasir Hussain respond to Fahad Mustafa on Tiktok
Aijaz Aslam Faces Criticism for Sharing Old Video With Ahmad Shah
Mariyam Nafees Posted Screenshot on her Instagram of Harasser who offers her money for Date
Ahsan Khan got the Blessing of Umrah
Imagine if a pigeon suddenly started flying in front of you while traveling on a plane?
"Mera Naam Joker" got unexpectedly to Arjun Kapoor