Bill Gates is currently the richest man in the world with over 108 billion dollars (more than a hundred trillion Pakistani rupees) and has been number one for years.

But who would have thought that Bill Gates, one of the world's richest men, would surprise a woman on Christmas Eve?

A user from Reddit, a Michigan-based social media site whose user name was Shelby, had the opportunity to be part of the website's Secret Santa Gift Exchange and had no idea that Secret Santa was second to Microsoft. Is the founder of

The woman came to know about this December 18 when she received a large packet through the courier service at home that Bill Gates sent her as a gift, along with a donation to the American Heart Association. Paid to pay tribute to the woman who passed away.

Bill Gates has been a part of Reddit's Secret Santa program for many years, and among those who fill out the program, he chooses gifts for himself.

In a post on RedditGifts.com, Shelby said Bill Gates' donation to the American Heart Association was the most meaningful gift he received because of his mother departing from the world in March.

The woman was sent by Bill Gates, weighing 36kg, which was so big that her car did not fit in. Shelby and her husband opened it at the courier location.

Inside the box was a playing card written by Bill Gates when the gifts were selected based on Shelby's interests.

Inside it was several small packs packed with gifts for the richest man in the world and his family.

This whole gift box was more than enough for the family, as you can see below 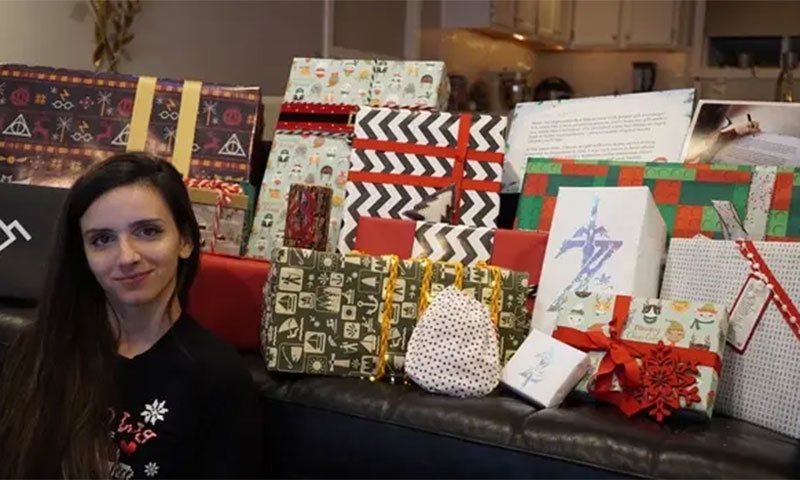 50 Most Popular Women of the World

Related Posts
Shahrooz and Sadaf Together in a Telefilm After Marriage
Actress Meera shared a wedding photo with Humayun Saeed
50 Most Popular Women of the World
The whole world together apologize to your God: Humaima Malik
Shaniera Akram: When we got married, they started asking, "Does it smell different from each other's skin?"
Syra Sharoz’s dance video on 'Meri Mummy Nu Pasand Nai Tu' went viral
Ayesha Omar's Explanation on Allegations of Marriage to Shoaib Malik
Mansha Pasha and Agha Ali will be appearing in action first time in the form of husband and wife