Junaid Safdar, son of PML-N vice president Maryam Nawaz and Captain (retd) Muhammad Safdar, sang at his marriage ceremony, which is also being commented on by various showbiz personalities. 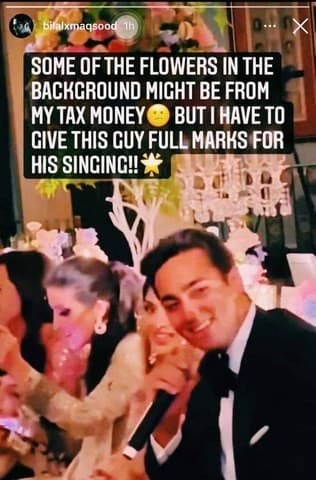 Junaid Safdar sang legendary singer Mohammad Rafi's song 'Kiya Hua Tera Waada' in his marriage, after which he is being highly praised on social media. After his video went viral, Pakistani singer and musician Bilal Maqsood praised Junaid Safdar in a sarcastic comment on Instagram.

I just want Bilal Maqsood to share his NTN number so we can know how much direct tax he has paid !!!

Bilal Maqsood said, "The flowers in the video may be from my tax money, but I will give the song numbers to this boy." Following Bilal Maqsood's Instagram story, various comments are also being made by Twitter users. "I want Bilal Maqsood to share his NTN number to see how much he pays in taxes," wrote Monis Shoaib.

On the other hand, a user named Mohsin praised Bilal Maqsood and said, "Bilal Maqsood has overwhelmed you." In response to Bilal Maqsood's story shared on a social media account, actress Areeba Habib said, "We are still paying taxes with zero returns, but still the heart is Pakistani." In another comment, he wrote, "We should not drag children into all this."Various actors including Saboor Ali, Zoya Nasir, Effat Omar, Anusha Ashraf praised Junaid Safdar's voice. It may be recalled that Maryam Nawaz's son was married on August 22 in a ceremony held in London in which he participated through video call.

Junaid Safdar and Ayesha Saif's wedding photos are circulating on social media while a video has also gone viral since last day in which Maryam Nawaz's son is seen awakening the magic of his voice. A professional singer was also hired for the wedding of Maryam Nawaz's son, but the videos that went viral show that when Junaid Safdar was caught with a mic, he surprised everyone with his singing.

Related Posts
For God Sake, this is not the time to make fun of anyone or play with emotions, Meera
Kenya: Due to poverty, mother cooked stones to feed hungry children
Zulfi Bukhari Is the Only Politician in the List of 100 Pakistani Attractive People
Yasir Hussain Killer and Ayesha Omar Ready to Become Police Officers
We all need a friend like Zawar in life, the story of Zawar's eternal sacrifice
I don't understand why people cry over separation, Javeria Abbasi
Faisal Qureshi's Meaningful Message on Sushant's Suicide
Children's stories are now being broadcast from space