Ayman Saleem Explained the Reason for His Withdrawal From Acting

Two months after declaring her retirement from acting, Pakistani actress Ayman Saleem, who rose to fame following her first play, explained why.

On social media, a video clip from the private channel's programme 'Time Out with Ahsan Khan,' in which the actress explained her decision to leave the industry, has gone viral. According to Ayman Saleem, "I came from the business world, therefore I wasn't entirely prepared when I entered the showbiz profession," and "our industry is very different from the rest of the industry."

The actress admitted that when she initially entered the industry, she wasn't sure if she wanted to do it or not. "That's why I took a sabbatical from show business to see if I really needed to do it, and if I did, I had to do it permanently," he explained. 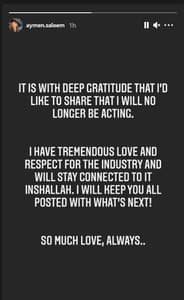 Ayman Saleem made her debut on the private channel Hum TV with the Ramadan special drama 'Chipke Chipke,' which was a huge hit with the audience. In the drama that aired in April and May of this year, Ayman Saleem played a girl named Ramisha aka Mashi. Ayman Saleem and Arsalan Naseer's 'Mashi and Hadi' were also quite popular with the audience in 'Chupke Chupke.'

Not only that, but following Eid, both actors appeared in an ad for the well-known clothing company Soo Kamal, and later they were seen modelling for Ayman Saleem and Asim Jofa, among other companies. It's worth noting that, before to entering the area of acting, Ayman Saleem set a world record over a decade ago.

In 2010, she set a new world record for the most girls in a smart car, breaking the record with her A-level mates. In this regard, Ayman Saleem appeared on well-known comic Omar Sharif's show 'The Sharif Show,' which went viral after his debut on social media.

In the video, actress Ayman Saleem claims to have broken the Guinness Book of World Records by sitting 18 passengers in a smart car for 5 seconds. The actress claimed that when she saw the world record, she decided to break it and recruited 18 girls to sit in a smart car with them for 10 seconds.

Related Posts
No Matter What Clothes Women Wear, Men Will Account for Their Looks, Hamza Ali Abbasi
Mathira Deleted All the Photos From Instagram
Best and Worst Looks at Lux Style Awards
Praises of Sahir Ali Bagga for Stopping Music in Respect of Adhan
Mawra Hocane calls for execution of 8-year-old Hooz Noor killers
Leading Singer Alamgir Haq Denies Death Rumors
Prince Harry begged for a job
Do you know when and how the tomb of Quaid Azam was built?