The brand introduced by Pakistan's leading fashion house has been accused of copying the style of blockbuster Bollywood 'Padmavati' while promoting the brand.

The fashion brand (Juvanti) recently introduced a bridal coach named 'Khosh', which featured Ayeza Khan and her husband Danish Teymour in a promotional campaign. The fashion brand also released a short documentary fiction film in an attempt to show the fashion of kings and emperors of the 1554 era.

When a photo of Ayeza Khan and Danish Taimoor was shared on Instagram of fashion house brand Khush Wedding Magazine, people accused them of copying them. In addition to the aforementioned photo, both the actors were also seen in a promotional documentary in a Bollywood movie scene. 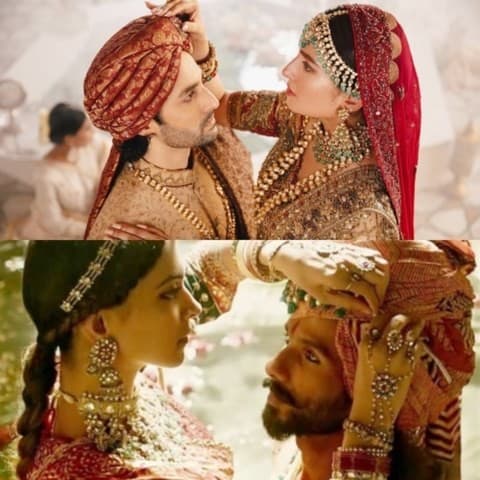 Both the actors have copied the romantic scenes of Shahid Kapoor and Deepika Padukone from 'Padmavati'. There are a lot of similarities between the photos and videos of the shoot of Pakistani actors and the scenes of 'Padmavat'. In 'Padmavat' too, Shahid Kapoor and Deepika Padukone are seen wearing fashionable clothes from the Mughal era, while Ayeza Khan and Danish Taimoor were also seen promoting clothes similar to 15th century fashion.

Some people are also criticizing Ayeza Khan and Danish Taimoor for copying Padmavat's style, but most people seem to be praising them.

Discover the link between social media and food choices

Related Posts
Our Technical Department Has Not Gone That Far So the Color of Drama Can Be Seen in the Film, Usman Mukhtar
First time Mahira Khan has expressed her displeasure with Meera
Pictures of actress Kubra Khan viral on social media
Khalil-ur-rehman's Inappropriate Remarks Regarding Various Personalities
Pakistan International Screen Awards will be held soon
Leaked Videos of Another Pakistani Model after Rabi Pirzada
Designer of HSY, Hassan Sheheryar Yasin Ready for Acting in Drama
Women in Argentina again mobilize to legalize 'abortion'