Ayesha Omar Is Not Encouraging Women to Wear Shorts

In this age of social media, showbiz personalities, and especially women are constantly being criticized for some reasons. And recently, the same thing happened with actress Ayesha Omar, when she wore a unique outfit for the virtual ceremony of Lux Style Awards on the closing day of 2020.

The Lux Style Awards 2020 ceremony was held virtually this time because of Corona and the ceremony also featured the red-carpet style of women including Ayesha Omar. Ayesha Omar later shared a photo of her dress on Instagram, saying that the dress was given to her as a gift by two new girls stepping into the world of fashion. Sharing a short video with the dress, Ayesha Omar described the year 2020 as a unique year and wrote that many people lost their loved ones in it and many people stayed away from their loved ones due to illness while many people lost their jobs. 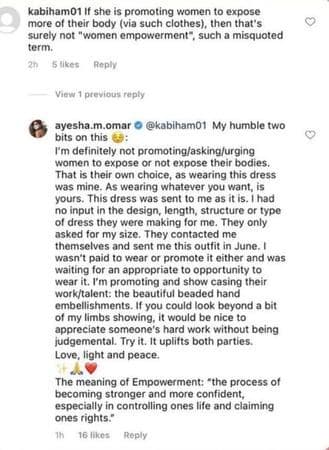 In a detailed reply to the fan's comment, Ayesha Omar denied the allegation and wrote that she was not encouraging women to wear shorts nor was she telling women what kind of clothes they should wear. The actress replied to the critical fan that women want to know what kind of dress they want to wear and they also wear it as per their choice, it should not be a problem for others.

The actress explained on the bold dress that the dress was sent to her by two unknown women, who contacted her in June 2020 and took only the size of the dress from her, but when she found the dress, it was what was seen in the video. He clarified that he did not wear this dress for the sake of money and the said dress is not part of any advertisement.

The Turkish President will arrive in Pakistan at 4:30 pm this evening

Related Posts
Gigi Hadid has confirmed that she is pregnant and is excited about her first child
Meera wants to be a singer now
Ayeza you are my favorite actress, Imran Abbas
Memes of Mery pas Tum Ho
Indian actress Jaya Bhattacharya shaves her head
Actress Eman Suleman married quietly
Is Priyanka Chopra Jonas pregnant with first child?
Mahira Khan told that, when will she get Second married