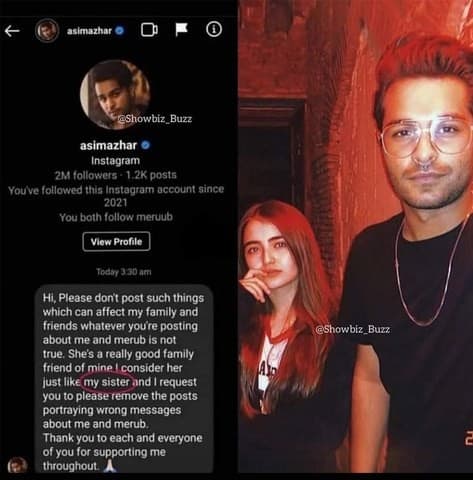 However, after the fake message went viral, Asim Azhar clarified in his tweet and Instagram story that the said message is fake. Expressing good wishes for the fans, Asim Azhar wrote in his tweet that the screenshot of the chat spread in his name is fake and please refrain from spreading it further. At the same time, he explained that he would make every decision about his life as clear as ever.

The screenshot floating around of my chat with a fan is FAKE. I request all to not spread it any further.

Also, any announcement regarding my life will be made from me directly to you like always.

I love you guys ♥️,
Asim

Although Asim Azhar clarified that a screenshot spread in his name was fake, he did not say in his explanatory statement whether he was engaged to Merub Ali or not. He did not confirm or deny the news of the engagement but said he would make a clear decision about his life. Just as Asim Azhar did not explicitly deny the news of the engagement, so far Merub Ali has not issued any explanatory statement in this regard.

Even after Asim Azhar explained about the fake screenshot planned in his name, the fans asked him if he wanted to explain the engagement issue and not the screenshot issue, so let the singer know that he is engaged. Some people said in their explanatory statement that Asim Azhar's statement made it clear that Merub Ali is not like his sisters but it was not clear whether he was engaged or not.

Related Posts
Saudi woman scholar's unique business
Indian singer Gippy Grewal visits Nankana Sahib and Thanked Imran Khan
Interesting video viral of Dwayne Johnson with his daughter
Billie Eilish spoke about his physicality, desires, and mental problems.
Mehwish Hayat: A Girl Can Be Happy Without Marriage for 30 Years
Aryan Khan handed over to Narcotics Force on remand along with his associates
Paris Hilton married
When Did Sadaf and Shehroz Sabzwari First Meet, When Did They Fall in Love?