In the case of the video of actress Hania Amir and singer Aashir Wajahat which went viral two days ago, where ordinary people and showbiz personalities have also jumped, singer Asim Azhar also made an entry in it. In the past, news of Asim Azhar and Hania Amir's relationship used to adorn the media, and photos and videos of both of them used to go viral on social media. The video suggests that he apparently made the video to entertain fans, but after the video went viral, people criticized him and called his style nude and bold. Hania Amir had expressed her grief over self-criticism after the video went viral in various posts on Instagram on June 5 and 6. She called self-criticism patriarchal thinking and said that if a man shared such a video or photo, he would be praised but the role of a woman is being tarnished.

Later, singer Asher Wajahat also broke his silence after criticizing his video and expressed regret over the attitudes of the people. Asher Wajahat wrote in his short tweet that as a nation we have forgotten the killing of millions of innocent Palestinians and are worried about having fun in the room of sister and brother. But despite this, both of them continued to be criticized and many people called their video immoral and in the midst of the criticism against them, Asim Azhar also made a vague tweet, which further complicated the matter. Asim Azhar shared a jiffy photo of Anupam Kher in a tweet on June 5, in which it was written that 'Bal Bal Bachaye' and at the same time he also thanked in the caption. After Asim Azhar's vague post, people thought that maybe his relationship with Hania Amir had ended and at the same time he was also criticized. Later, Hania Amir also expressed her grief over Asim Azhar's vague post and tweeted without naming anyone that either you can be the best person or you can be a 'former lover' without hurting anyone's dignity.

After Hania Amir's tweet, Asim Azhar posted an explanation and wrote that in fact, his vague post was not for the person who got hurt. Interestingly, the two personalities posted without mentioning each other's names, but users understood that the two were complaining about the end of their relationship. Asim Azhar wrote in his long explanatory post that he has made a post for the first time in a year and a half, so people are upset, while for the last one and a half years, various things have been said about him on social media. 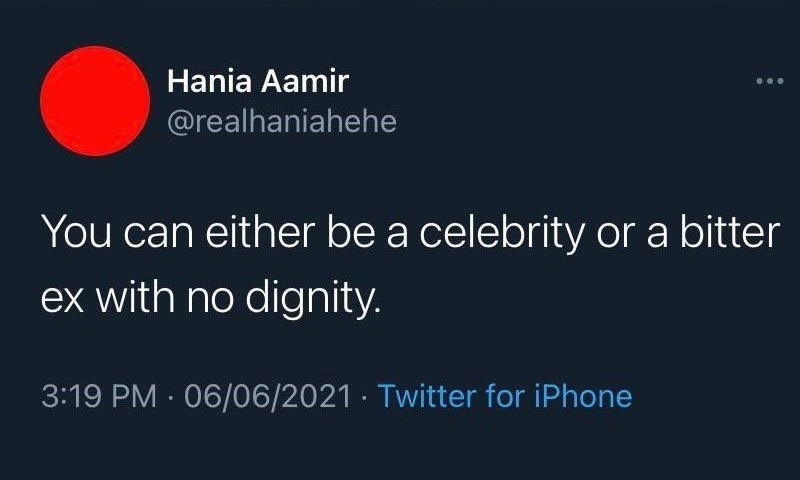 Later, Hania Amir came up with the idea and she also clarified in a long Instagram post that her intention was not to start a discussion about 'ex-lovers and friends'. Hania Amir spoke openly on the whole issue in a long post and wrote that in fact all the posts made by her after the video went viral were just to show how women are harassed on social media and who He is also criticized for his small talk.

He wrote in a long post that he raised his voice against patriarchal thinking and system in his posts. Hania Amir wrote that in her posts, she criticized people who consider the issue of sexual harassment of women as a joke and see women only as sexual objects. The actress wrote in her long post that she is not running away from admitting her mistakes. She realizes that she also made mistakes and she is apologizing to everyone and will try to make the next social media popular Make a better place.

He also vaguely complained to Asim Azhar and suggested that he also not make vague posts in future, if he has anything to say, say it clearly. At the end of the post, he also expressed his love to all the fans and sincerely apologized for his mistakes.

The First Glimpse of Humayun Saeed's 'The Crown' is Out

How to remove plagiarism? 4 steps to avoid Plagiarism

A 7,000-year-old wooden well has been discovered in the Czech Republic

More than 200 arrested on charges of inappropriate clothing and harassment