Agha Ali, a well-known Pakistani actor, has slammed organisations and social media accounts for misrepresenting a comment he made about women.

Agha Ali expressed his displeasure in an Instagram storey, claiming that most media outlets had misinterpreted his recent interview. "It is very sad to see how your remarks may be rendered so bad so media pages can receive some attention and likes," Agha Ali stated in his Instagram storey. 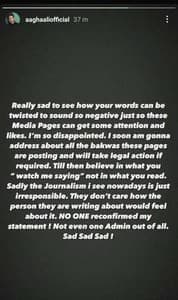 "I'm quite disappointed. I will shortly correct all of these pages' errors and, if necessary, take legal action "he stated "Until then, believe what you see me saying rather than what you read (from other sources)," Agha Ali added. "Unfortunately, I see a lot of poor journalism these days," he remarked.

"They (the media) don't care how the person they're writing about feels about it," the actor stated. "No one has reaffirmed my stance." When asked about his choice of Hina Altaf as his wife, Agha Ali replied in an interview with the Arab website Urdu News, "There were others who were artificial, meaning they were not what they were appearing to be."

He went on to say that after working with Hina, he saw that she is a really genuine person who does not imitate others, tells the truth, and performs her job. On the other side, Hina Altaf revealed in her Instagram storey that most media outlets misreported Agha Ali's statement. 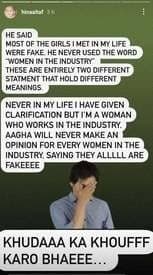 "She remarked that most of the girls she met in her life were made up," she wrote. "She never used the language of showbiz ladies." "These are two very distinct statements with different connotations," Hina Altaf explained. Agha Ali and Hina Altaf were previously chastised on social media for taking a vow from their wives not to gain weight last year.

The actor then went on to clarify his pledge to his wife not to gain weight in an Instagram post.

Related Posts
Mahira Khan: The News of Secret Marriage
PEMRA's Instruction Not to Broadcast Obscene Material in 'Fitrat' Drama
Journalist scammed with Politician for not giving an interview, Reema Khan
Imran Abbas Will Host Ramadan Transmission From Turkey
Aiman Muneeb Share Her baby Amal's Pictures on Social Media
Justin Bieber and Ariana Grande sing together for the first time
Before Appearing on Tv, His Wife Instructed Him Not to Talk About Marriage, Shahid Afridi
Hira Mani Robbed Outside Her House - CCTV Video Leaked