An extraordinary "denim artist" who creates pictures with jeans.
London: They say that passion has no value. Perhaps the same thing happens to Ian Berry, who calls himself "Dynamo" who buys expensive jeans (denim pants) and cuts them in such a way that a beautiful picture becomes.

Before proceeding, it is important to point out that the fabric from which we have paints called "jeans" is called "denim" worldwide; The same clothing in Pakistan was also called "2 ghoora boski".
Ian Berry started making denim pictures about seven years ago. One day his mother ordered him to clean the room. These days, Ian was an artist in the creative department of an advertising company. 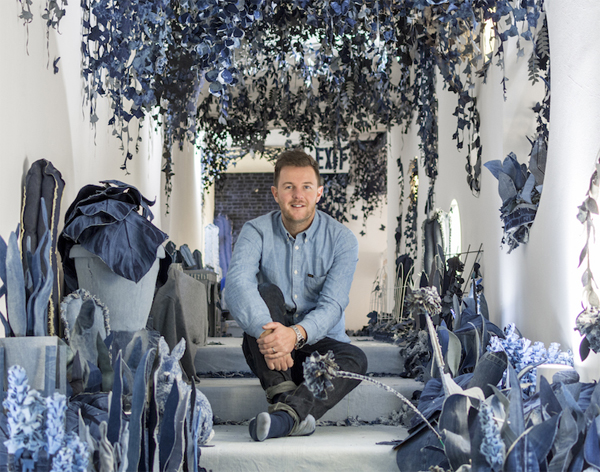 "When I started cleaning my room, I was shocked to find that I had a pile of old denim paints, which were of different designs and colours. I threw them instead of throwing them and thinking what to do with them, "Ian said in a web site.

"I've been thinking about this for several months, and finally a year and a half later, I started making art with old denim paints," he says. This job cost me so much that I said goodbye to the advertising agency job and got engaged in the same job on a full-time basis. "

Ian Berry's girlfriend and her family were also very upset with this new "profession". He believed that doing so for a commercial artist was a matter of putting his entire career at stake. But within a few months, they were convinced.
Owing to his unique style, Ian's work has become popular in the United States and other European countries, in addition to his home country of Britain, and his works have begun to be sold at major art galleries around the world.
With the invention of a fine art and expertise in the art, Ian Berry has gained international fame today and he is no longer in need of old denim paints, but is now buying new denim paints from famous brands to create new and antique paintings. Cut them off.