An answer to the user who interferes with the private life of Yasir Hussain
KARACHI: Actor Yasir Hussain has responded inadvertently to a user who interfered in his private life.
Yasir Hussain And Iqra Aziz are celebrating Honey Moon in Sri Lanka after the wedding and are also in touch with their fans through their photos and videos on social media. Recently, Iqra Aziz shared a selfie on social media of her and Yasir Hussain, which some people commented positively and some criticized.
However, one user commented on the photo or said that Iqra does not like being on social media because she is your wife now. Yasir Hussain replied to this user and said, "If you do not like your thinking then why not keep up your business."

Other social media users praised Yasir's response, saying that people here cannot keep up with their work. The proverb, who became even more infuriated and said that he is a big fan of Yasir, therefore he gave Yasir Khan advice that what is wrong is wrong, as a Muslim you should stop watching the evil. 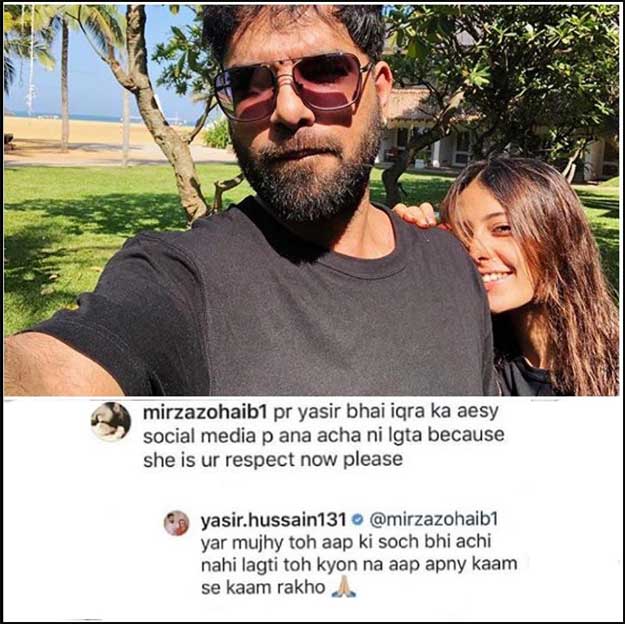 The Difference Between Japanese Tea and Chinese Tea

Related Posts
Hareem Farooq unveils the important secret
When the famous TV actor was hanged
Social media users apologize to Shahroz and Syra
A talk With Italian architect trapped in Lahore due to coronavirus
Actor Feroz Khan decided to launch his own YouTube channel
What is Maya Ali doing during Lockdown?
Two and a Half Months After the Marriage Claim, Hareem Shah Announced Not to Get Married
اپنے بجائے والدہ کے لیے دلہا تلاش کرنے والی لڑکی