Model and actress Amna Ilyas, who has been criticized several times for sharing bold statements, videos and photos, is being criticized for singing an item in the recently released action thriller film 'Chaudhry'.

The action thriller film 'Chaudhry', based on the life of martyred Sindh police officer Chaudhry Aslam, was released in cinemas at the end of June last year.

While the release of the film, which has been delayed for at least five years due to various reasons, was appreciated by some people, some people also criticized Amna Elias for giving item performances in it.

Although the film crew did not release the full video of Amna Ilyas' item song 'Atash', the actress was criticized after watching the teaser and pictures of the song.

Although Amna Elias has performed on some songs before, for the first time she performed in a slightly bold style in 'Atash' and some people praised her performance.

The actress had also shared the teaser of the song 'Atash' on her social media account, after which people criticized her and tried to remind her of social traditions.

Most of the people criticized him on the teaser video of his song and termed his performance as 'obscene' and some people also demanded a ban on the film 'Chaudhry' on the distributor channel 'Hum TV'.

Some people who criticized the video of Amna Ilyas' song were called by other people. In reply, they wrote that on one hand they are criticizing the actress and on the other hand they are also watching her video.

Some people termed Amna Ilyas' performance as against Pakistani traditions and also asked when the full video of 'Atash' song will be released. After a while, he has appeared on the big screen. Recently, his web series 'Phatak' has also been released on the streaming website 'Picture TV'. 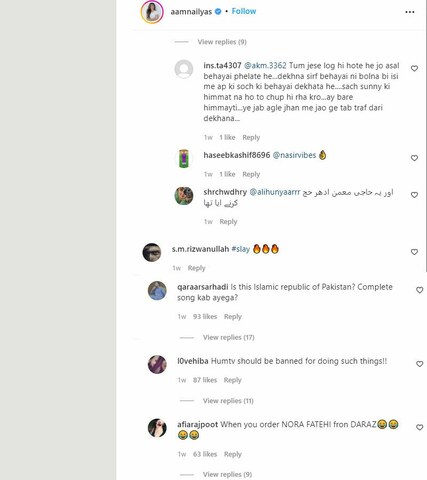 'Phatak', based on a story revolving around drug dealers and drug addicts, has been released on Picture TV in Urdu as well as Pashto and Punjabi.

Picture TV is Pakistan's new OTT platform, where content will be broadcast in different languages ​​of the country.