Bridal photo shoot of well-known actress and singer Alizeh Shah and actor Muneeb Butt is going viral on social media on which various comments are being made by the fans.

On the other hand, Muneeb Butt also shared the photos of this photo shoot with Alizeh Shah on his Instagram account. The photo shoot of Alizeh Shah and Muneeb Butt in an off-white theme went viral on social media and various comments were made about them.

One user congratulated Alizeh Shah and wrote, "I hope this relationship lasts a lifetime." Responding to the above comment, Aliza Shah also shared a screenshot of it in her Instagram story. Reacting to Muneeb Butt's marriage congratulations, Alizeh Shah said, "It's just to be so ignorant of the world." 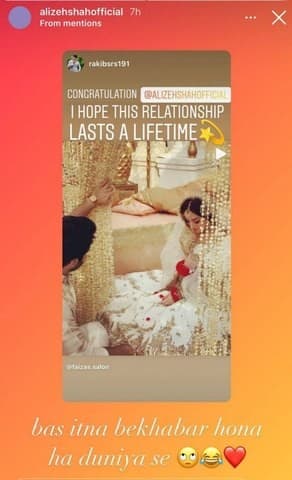