Aima Baig joined the video-sharing platform with a verified account, and in the first post, she shared the teaser of Pakistan Super League (PSL) 7's official anthem, 'Aage Dekh'.

As soon as the singer, who has won several national and international awards, created an account on Tik Tok, more than 8,000 people followed her, while her videos also got thousands of views. 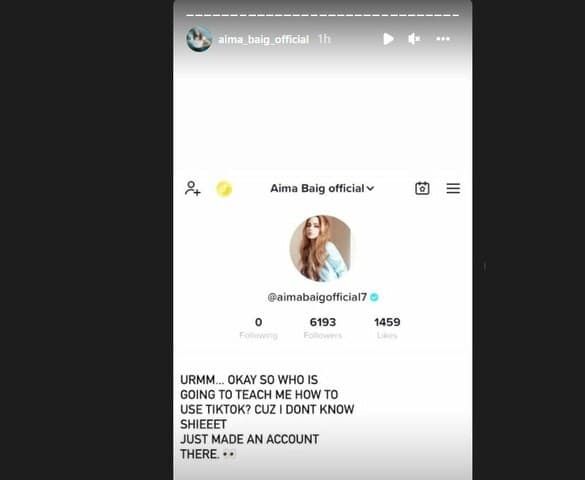 The singer also tried to get the attention of the fans by using various hashtags while sharing the videos of 'Aage Dekh' on Tik Tok.

Before Aima Baig, several prominent personalities of Showbiz have created accounts on Tik Tok. At the same time, there are also accounts in President and Punjab Chief Minister Usman Bozdar on the short video sharing app.

While Tik Tok is seen as a controversial app in Pakistan, she said the app is also the most popular among the new generation, and its users are increasing day by day.

Aima Baig is one of the youngest famous actresses in the country. Apart from this year's Pakistan Super League anthem 'Aage Dekh', she also evoked the magic of voice with Naseebo Lal in last year's anthem 'Grove Meera'.

Aima Baig is well-known for her unique voice and is one of the most popular singers of the new generation. Apart from pop singing, she has also sung for movies.