Actress Hiba Bukhari and her husband Arez Ahmed have shared a video at the end of their wedding ceremonies, revealing that the two had an altercation the very next day.

Arez Ahmed and Hiba Bukhari got married on January 7 2022, after which their other wedding ceremonies took place. A day ago, they shared a video made during the wedding ceremonies, which went viral as soon as they saw it.

The two actors shared a video about 7 minutes long on Instagram, in which they were seen talking about their first meeting before marriage, falling in love with each other, getting married, and the fears that followed.

The video shows both actors sitting in a car in a wedding dress talking, and the caption states that the video was made while the two were going to their wedding ceremony.

At the beginning of the video, Hiba Bukhari asks her husband how bad she feels. Arez Ahmed laughs and replies that she feels so bad that he married her.

In the video, Arez Ahmed told the bride that when he first saw Hiba Bukhari before falling in love, the music of love resounded in his heart, but he ignored the music.

Arez Ahmed admitted that after ignoring the issue of falling in love with Hiba Bukhari for a long time, he fell in love with her and now, after getting married, he is scared.

Meanwhile, Arez Ahmed became a little emotional, to which his wife asked him what to fear now. Now the marriage has taken place. 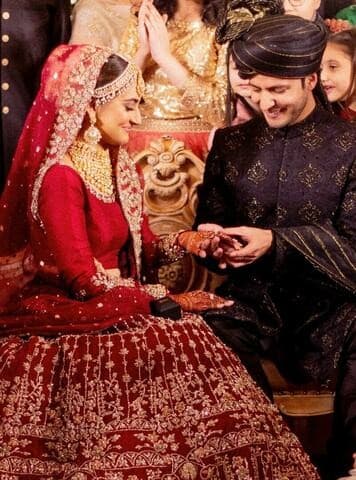 Hiba Bukhari also got a little emotional after hearing the groom's words, and he said that she is also scared, to which Arez Ahmed  put his hand on his cheek and said to him in a movie-style, "Why are you trembling so much?"

In the short video, Arez Ahmed asked his wife that Etihas is a witness that she should fight with him on the next day of marriage, to which Hiba Bukhari, instead of answering him, asked him to explain the reason for the fight.

Arez Ahmed fell silent at his wife's question, to which Hiba Bukhari asked him to tell where he had been missing all day on the very next day of the wedding and with which friends?

Fans praised the two for sharing a romantic video, while some criticized it, saying it was unnecessary to share it on social media.

A Beginner's Guide On How To Dab

Related Posts
Lockdown doesn't matter, it was the same during cancer: Sonali Bendre
Nawaz-ud-Din Siddiqui's wife approached the court to seek divorce
A woman who has been realizing the plastic plants real for 2 years
For the First Time, Turkish Musicians Sing in Solidarity with Kashmiris
What is a 'Bois Locker Room' and girls locker Room?
Sanam Jang Explanation on Divorce Rumors
'I Will Try to Pay Off the Debt of Love From the People by Working in Pakistani Dramas' Engin Altan Düzyatan
Fawad Khan and His Wife Sadaf Khan Have Welcomed Their Third Child