Singer and musician Adnan Sami Khan, who gave up Pakistani citizenship and took Indian nationality, got upset after deleting all his Instagram posts and posting 'Goodbye'.

On July 19, Adnan Sami Khan deleted all posts from Instagram and shared a short video, which did not contain any audio.

In the five-second-long video, a goodbye can be seen written while he captioned it with just 'Goodbye', leaving his fans upset.

According to the Indian newspaper 'Hindustan Times', after Adnan Sami Khan posted 'Farewell', people commented on his post, inquired about his well-being, and asked what happened to him.

Some people commented that after the suicide of Sushant Singh Rajput, people are now afraid of such vague messages.

Some people prayed for him instead of questioning him and expressed hope that he would be well. 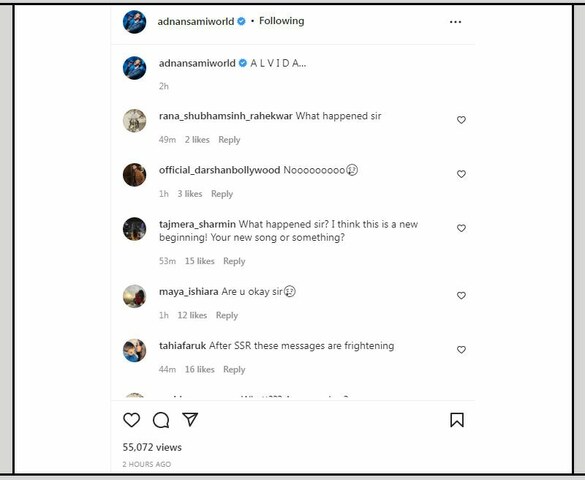 Some users even commented, ' is Goodbye the title of his upcoming new song'?

According to 'India Today', some people speculated that the singer would release a new music album, Alvida.

Similarly, some users speculated that they might be about to say goodbye to music.

The singer-actors merely posting 'Goodbye' on Instagram hints that he will release a song or music album with the same name.

Before this, many Indian actors and singers deleted all Instagram posts and uniquely promoted their songs or films.

It should be noted that the Indian government granted Adnan Sami Khan citizenship on January 1, 2016. He initially moved from Pakistan to India on a visa in 2001 to work in show business.

He was criticised for renouncing his Pakistani citizenship and was even called a 'traitor'. Still, at the same time, he was also accused in India and people there have been calling him a Pakistani agent.

Adnan Sami Khan has been married three times; his first marriage was to Pakistani actress Zeba Bakhtiar in 1993; the couple also has a son Azaan Sami Khan, and they later divorced.