Actress and host Sanam Jung and her young daughter quarantined themselves after being diagnosed with Corona.

Sanam Jung said in her Instagram story that she has been diagnosed with Corona, but she does not have any severe symptoms. The actress said that she and her young daughter quarantined themselves. In her story, the actress told people not to take the Corona epidemic as a joke and to take precautionary measures against it. 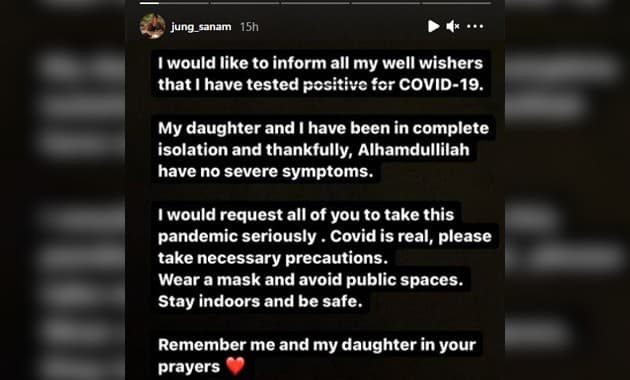 Sanam Jung told fans to wear face masks, avoid crowds, and stay at home. The actress also appealed to her fans and acquaintances to pray for her speedy recovery. Before Sanam Jung, actress Mahira Khan was also diagnosed with Corona. She also informed fans and close ones in her social media post that she had quarantined herself.

Before Mahira Khan, actress Neelam Muneer had also confirmed that she has been diagnosed with corona. Earlier, actor Behroze Sabzwari was also diagnosed with corona in late November and was shifted to Zia-ud-Din Hospital in Karachi after his condition deteriorated and he was discharged from the hospital on December 9.

Related Posts
Campaign Case Against Ali Zafar: Challan Accepted Against Mesha Shafi and Others
Separation between Megan Fox and her husband Brian Austin Green
Nawazuddin Siddiqui Decides Not to Work in Streaming Shows
Happy New Year from the Stars of Pakistani Industry
Harvey Weinstein raped me in hotel room : Jessica Mann
kubra khan Leaving Showbiz
Mariyam Nafees Posted Screenshot on her Instagram of Harasser who offers her money for Date
An answer to the user who interferes with the private life of Yasir Hussain