In nearly 190 countries around the world, a lot of information about the coronavirus, which has infected 2.5 million people and claimed the lives of more than 170,000 people, is being spread on the Internet in a way that is far from the truth.

In addition to the Internet, millions of people around the world are suffering psychologically by spreading misinformation, false videos and images of the Coronavirus on social media websites.

While videos, audios, and images attributed to doctors on social media sites are going viral with misinformation about Corona's avoidance, videos and images linked to Corona are also being shared which has nothing to do with epidemics.

A similar picture went viral on social media in several Asian and European countries in recent days, spreading the image of people dying from the coronavirus.

However, the picture was not of the Corona victims, but of a scene from a horror drama series.

According to the news agency AFP, the photo shared after April 19 on social media platforms in several countries is actually a picture taken from the American crime thriller horror series The Walking Dead, released in 2010.

The report said that a photo of the series was initially shared on Facebook with a long and wide post in Tagalog and English, which many people started sharing as soon as they saw it. 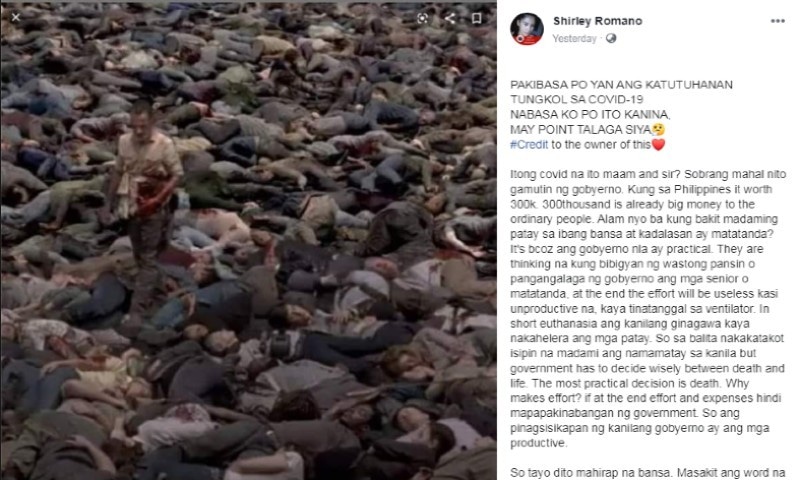 The report said the image was linked to elderly people dying from the coronavirus, and the post claimed that elderly people in many countries were dying in Corona because the governments themselves did not have them.

According to the report, the post claims that older people are dying from the coronavirus because the governments of many countries do not want to save them because the governments think that they are no longer useful. Therefore, instead of rescuing them, the youth should be rescued and the elderly are being removed from the vanity litter at the last minute.

According to AFP, after giving similar arguments, a picture of an American drama was shared in which a man is passing through a pile of corpses in a state of helplessness.

According to the news agency, the image was shared in several countries and millions of people who saw the post went through the trouble, but the actual viral image had nothing to do with the Coronavirus.

According to the report, the picture was taken from a scene in The Walking Dead, which was obtained from a video released by the well-known website IMBD.

The drunk passenger changed the direction of the flight

Related Posts
Campaign Case Against Ali Zafar: Challan Accepted Against Mesha Shafi and Others
The Queen Elizabeth II's birthday will not be celebrated in the UK
Preity Zinta Gives Birth to Twins
I hope you will forgive your Amir Liaquat: Aamir Liaquat has released an explanatory video on social media
Despite the epidemic, the Emmy Awards will be held in September
Actor Ahsan Mohsin Ikram Expresses Love for Manal Khan
Bail of 5 Accused Including Effat Omar in the Case Filed on the Complaint of Ali Zafar
Owners give leave to their employees with salaries, Mahira Khan