Maham Amir was born on 26th December 1990 in Karachi, Pakistan. Maham Amir is a beautiful and well-known actress of the Showbiz industry. She is a model and an actress. She is a Daughter-in-Law of Parveen Akbar. She is a charming actress who is a supermodel. In childhood, she wished to be one of the best actresses in the industry and she has fulfilled her dream through her hard work and struggle.

She is a famous and well-known face of the Showbiz industry. At the start, she has worked in a supporting role but now she has worked as a lead role in the drama serials.

Maham Amir As an Actress:

She has worked in many drama serials and has worked with many TV channels. Maham has played different characters but she has most of the positive roles. Maham has worked with many best TV stars including Fahad Mustafa, Hareem Farooq, Muneeb Butt, Sami Khan, Sami Khan, and many other famous stars. Most of the best serials of Maham Amir is “Ek Hi Bhool”, and “Tum Miley” of ARY Digital, “Rishton Ki Dor”, “Roshni”, and “Babul Ka Angna" of Geo TV, and many others. She has performed both as a lead role as well as supporting roles.

Maham Amir As a Model:

She has worked with many famous designers of Pakistan. She has done various photo shoots for famous brands and she has been the part of various popular style weeks also. She has walked on the ramp for many designers. Maham has made his name prominent in the industry by her hard work and struggle.

Maham Amir got married to another well-known face of the industry Faizan Sheikh who is also co-host with Faysal Qureshi and Adeel Amjad in Salam Zindagi who is also an actor. The couple got married in August 2018 in an event. Maham Amir's cousins Zara Tareen and Hira Tareen are also a part of the Showbiz and a very prominent Pakistani actor and model. Maham Amir’s Mother-In-Law Parveen Akbar is also a prominent Pakistani Legendary actress who is in the industry for a long time.

Faizan Sheikh was born on 5th September in Karachi, Sindh, Pakistan. Faizan Sheikh is a Pakistani actor who has worked in various drama serials. He is also the co-host with a legendary actor Faysal Qureshi. He got married to Maham Amir on 1st December 2017. 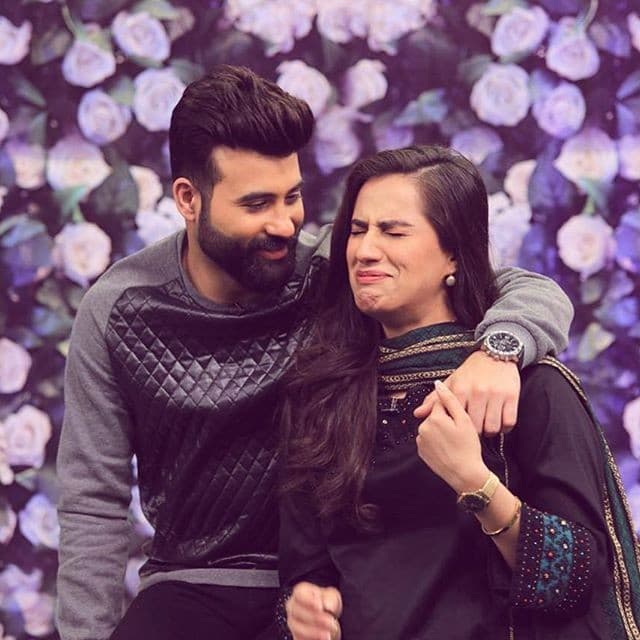 Maham Amir will be seen in upcoming Horror Romantic Drama:

Maham Amir is a well-known face of the Showbiz industry. She has worked in many drama serials. Now she is going to be seen in a Horror Romantic Drama playing the role of Ghost (Jinn) named Adeena. This drama serial was directed by Tehseen Khan and it will be produced by Babar Javed. The script was written by Faisal Manzoor.

Maham Amir has talked about her character that she is going to be played in this drama serial she said that I will be the role of jinn named Adeena. Basically, there are different types of jinn in our religion and I’m going to play the role of Ifrat Jinn who has the power to do anything. Maham Amir shares her experience of working; she said we had a great experience while shooting for this serial. We had shot in some places which looked really haunted and scary in the middle of the night. The Horror romantic drama title was not revealed yet, but it will be soon released on APlus.