Freddie Mercury, born Farrokh Bulsara on September 5, 1946, in Stone Town, in the state of Zanzibar (Tanzania) and died on November 24, 1991, in London, was a British rock singer.

With a vocal range of three and a half octaves and some operatic techniques, he was one of the most popular and technically accomplished rock singers. Leader of the Queen group, he composed several of his great successes including Bohemian Rhapsody, Somebody to Love and We Are the Champions. (Which was later remixed).

Farrokh Bulsara is the son of Bomi Bulsara (accountant for the British colonial office), and Jer Bulsara, both members of the Parsi community of India (of Zoroastrian belief). His parents, British civil servants, left Zanzibar for India when Farrokh was 7 years old. He has a little sister, Kashmira Bulsara born in 1952.

At the age of 1, Farrokh had his first taste of celebrity when the local photographer made his portrait and exhibited it in his window, after winning the first prize in a baby contest.

Farrokh Bulsara received his education at St. Peter's boarding house in Panchgani, near Bombay, India. The principal of St-Peter's had noticed Farrokh's aptitude for music and had written to Mr. & Mrs. Bulsara to suggest that they pay a little extra in addition to the school fees, so that little Farrokh could have the opportunity to study music according to the rules of the art. They agreed, and the latter began to take piano lessons. He also became a member of the school choir and regularly took part in the school's theatrical productions.

Farrokh quickly learned the piano where he excelled, reaching level V. at his first show with the first group to which he had ever belonged, The Hectic, playing within the school grounds. He acquired his nickname Freddie there, which even his parents quickly used. Freddie's choir training was very useful, and even there, his innate sense of theatrical performance was really highlighted, he played with flair and originality.

At the age of 17, in December 1963, the colonial revolution on the island of Zanzibar forced Freddie and his family to take refuge in the United Kingdom where he continued to study graphic arts and design. At that time, he set out to develop a line of clothing as well as to create short comics for small London newspapers. His graphic knowledge favored him since he himself created the Queen group logo much later. Today we still find certain graphic works drawn by the talented graphic arts student, with the small signature "F. Bulsara" at the bottom of his drawings and paintings.

After distracting studies of graphic design and the design of a line of clothes, Bulsara tries to integrate the Smile group, while assiduously spawning, with another formation, called Index (which will become Wreckage-sinking), thus than with the group Sour Milk Sea. During one of his rare concerts, confronting a restive microphone stand, he gets in the habit of grabbing the first element at arm's length: this will become one of the hallmarks of his stage play.

The King of the Party

Galloping test and phagocyted talents, it is at the end of the year 1970 that the one who now chooses to be called Freddie Mercury takes the direction of the operations, calls with him the guitarist Brian May, the drummer Roger Taylor, and bassist John Deacon, choose the name of the group, and even draws the logo.

Queen was born. Ten years of uninterrupted success followed, and some intimate vicissitudes: in 1976, and when he had publicly revealed, for two years already, his homosexuality, Freddie separated from Mary Austin (whom he remained very close until his death, and which he will make one of his main heirs), a young woman with whom he has shared his life for more than six years. In terms of his health, Mercury suffered very early from nodules in his throat: he systematically refused to have surgery on these growths. 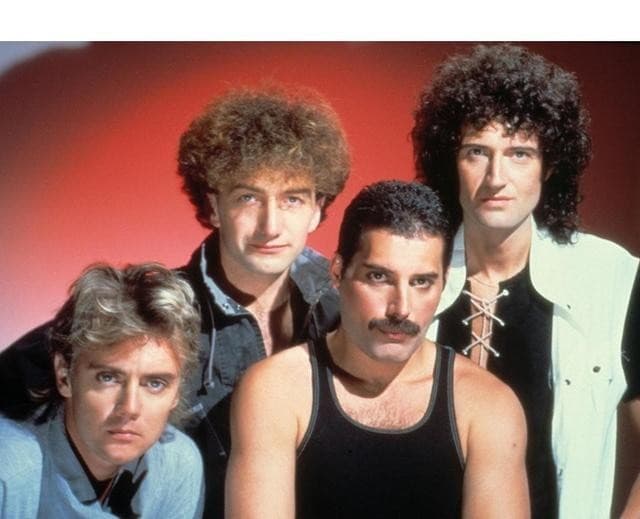 In 1982, and while the group, prey to press criticism, reproaching it for offering only blistering music in the punk era, has just granted itself a sabbatical year, Freddie Mercury finds producer Giorgio Moroder in Munich for his first solo project: the single "Love Kills" includes the new soundtrack, particularly controversial by purists, from the film by Fritz Lang Metropolis. After a dazzled meeting with the soprano Montserrat Caballé, the composition of a musical, and a bloated tour with Queen, Freddie Mercury records his first solo album (Mr. Bad Guy -1985).

The same year, Freddie Mercury began a romantic relationship with Jim Hutton, a boy hairdresser by trade: between their London residence and the studio in Montreux (Switzerland) - where a statue of the singer now recalls their memory - their couple will last until 'at the end. It was in 1987 that Freddie Mercury learned of his HIV status.

In 1988 a new original album was published: Barcelona allows an eternal encounter with Caballé. The title song becomes the emblem of the capital of Catalonia and the anthem of the 1992 Olympic Games. Very worn out by illness, Freddie Mercury does not appear anymore in his last public performances, only hidden under a thick layer of eyeshadows. Despite official denials, the disease continues its inexorable progression. Only pneumonia prevents him from repeating the song tracks of "The Show Must Go On" again and again.

On November 16, 1991, official recognition of the disease was reported by the media. On November 23, it was Freddie Mercury himself who, through an official press release, declared that he was carrying the AIDS virus. On November 24, the announcement of his death seized fans around the world. Freddie Mercury is cremated at Kensal Green Cemetery, and his ashes are scattered in an area known only to his family. A posthumous compilation of various remixes and other songs, only available in singles, was published in 1992: it was titled The Great Pretender in the United States and The Freddie Mercury Album in the rest of the world.

After Recovering From Omicron, Mahira Khan Changed Her Style.