Faryal Makhdoom was born on July 27, 1991. She is a Muslim American model. She is the wife of internationally renowned silver medalist boxer Amir Khan. This couple is currently living in U.k. Both are blessed with a daughter named Lamisaha Khan. Faryal Makhdoom was famous on social sites. She graduated from Rutgers University School of Arts and Political Science and journalism. She is an internet star and a model in the US. Her parents have a Pakistani background.

After graduation from University in journalism and Political Science, she created her YouTube channel where she started her beauty tips and fashion class. She also created her cosmetics range which she named Faryal Cosmetics where she sells different kinds of lipsticks and highlighters. She said that I'm doing all this for the women who don't know anything about fashion and makeup and they all can easily learn these from my YouTube channel. She is a fashion queen.

Faryal met Amir through a friend when she was studying at a university. Then they fall in love with each other. They exchange the rings and both get engaged on January 29, 2012. So many joined their marriage with a lot of love. Their marriage long last on 31st May 2013 in New York. On 23rd May 201, they both are blessed with a daughter named Lamaisha Khan.

Faryal Makhdoom is tall, gorgeous, her lips and eyes are quite attractive. She has turned into a style icon for desi ladies through her YouTube channel where she tells her fans how to put cosmetics in the right way. Faryal's YouTube is about everything: makeup and other things. She said that the reason behind the YouTube channel is to tell the Young Desi Ladies how to apply the makeup accurately. She said that you need only 15 minutes to apply in a right if you know the correct way of applying. Her way of applying lipstick distracts everyone.

FM cosmetics means Faryal Cosmetics created by Faryal who inspires everyone with her looks and lipsticks the cosmetics which suit everyone. She said these are all cosmetic for every skin tone which a desi woman can also wear and she looks so gorgeous.

Faryal's Husband is a famous Silver medalist name, Amir Iqbal Khan. He belongs to a Punjabi, Rajput family. He is now building a boxing institute called the Amir Khan Academy to create Pakistani boxing champions. Not in boxing, he is also interested in basketball, cricket, and football. He is also having a wide range of people around him, he also serves for many charity programs.

Once asked that Faryal has surgery or not? She answered that due to lack of sleep and had a bag in my under eye I wanted to get rid of it and to finish that, I wanted to lighten them. Then she went to the doctor where she got surgery. But she said I want to know why people understand the difference between plastic surgery and Fillers. But the pictures that she uploaded on her Instagram clearly show that she had plastic surgery on her face.

Faryal’s issue with her In-Laws:

Faryal and Amir are facing so many problems from their first three months of marriage because of Faryal's lifestyle. Amir's family is a pure Punjabi family. They have an objection to Faryal's life and the clothes she wears because she doesn't wear a Punjabi dress and doesn't wear a hijab and she is not fulfilling the Islamic Instructions. In their reply Faryal said that "I'm the woman of 2017, the modern era, where every woman can travel anywhere, where she can live the way she wants too, I’m free to go anywhere without restrictions. Faryal further said that Amir's parents beat me badly and cut-off me from my parents. She was quite angry with Amir. Amir explains this scenario by saying "The Childish Act". 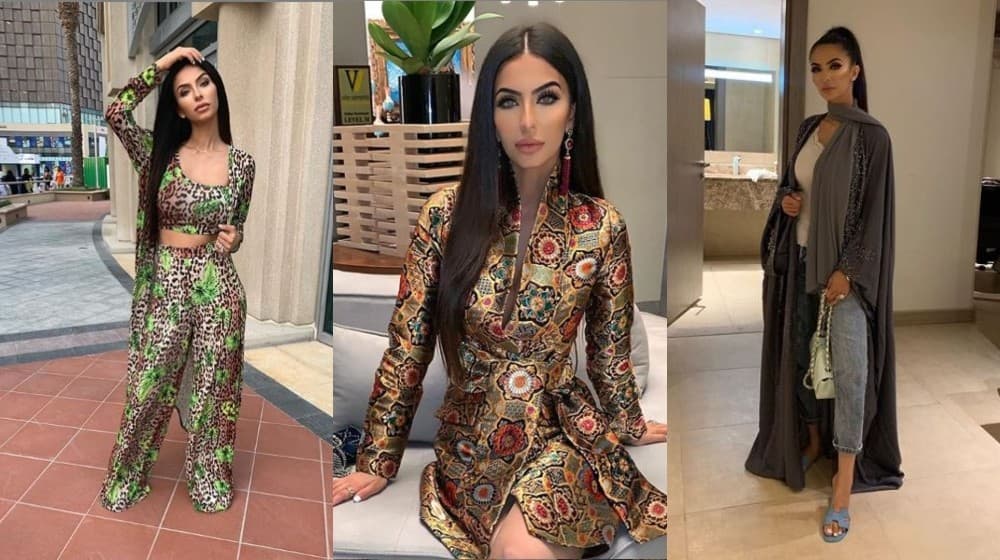 These problems continue for at least a month till November 2017, Faryal was asked to choose between her husband and his parents, but late on in November 2017 everything sorted quickly and now the couple is leading a very happy married life because everything is sorted out.

Faryal Makhdoom speaks Hindi, Urdu, Punjabi which makes her different in the fashion industry as well as in American and Pakistani fashion. Her favourite actor in Bollywood is Ranveer Singh, who she loves a lot, she said that he is a versatile actor and she falls in love with him. She also likes Priyanka Chopra and how she is doing in Hollywood. Faryal Makhdoom shows her love for India and Pakistan, and rejects the clashes between both countries, and said that there should not be disputes between the people of the same Skin colour and tone. She expresses her love to visit the historical places of Indian and Pakistan also.

Faryal wasn't interested in sports, like cricket, boxing, and football, after her marriage she started following boxing matches and cricket matches between India and Pakistan. She wishes to watch a boxing match of her husband Amir Khan and Vijender Singh, she thinks that this would be a great fight between them.

Faryal Makhdoom is a style icon and a YouTuber. In her YouTube Channel, she makes videos for the desi ladies how to apply makeup accurately. She is an internet personality, she runs the internet because of her looks and style. She runs her makeup brand & style.